Surgery Hits All the Right Notes for Musician

A construction accident could have cost Brigham Brough his decades-long professional pursuit of music, but his highly personalized treatment at Rhode Island Hospital kept the music alive.

It was a split second that could have made all the difference in Brigham Brough’s career and lifestyle. An accident with a circular saw amputated his left pinky finger at the top joint. Brough knew the stakes were higher for him than for most when it came to getting that finger successfully reattached.

Brigham is both a design-build construction professional and a touring musician who plays stand-up bass. Deep into the work of renovating his home, he made one unforgettable mistake with the depth setting on the saw. He credits his fiancée with having the presence of mind to find the severed digit, ice it and get him to The Miriam Hospital’s Emergency Department quickly. There, he was stabilized, then transported to Rhode Island Hospital, where plastic surgeon Richard Zienowicz, MD, was waiting.

Dr. Zienowicz met with Brigham before operating, and learned just how critical that finger was to the musician, a Brown University music grad who spent his 20s on the road playing gigs and festivals with folk-rock band Elvis Perkins in Dearland. Now 34, Brigham still plays professionally while also putting his energy into growing his design-build firm.

“Being a guitarist, I knew what was required of that particular finger, but even more for a bass player. Because of the pressure and the angle required, he was going to have to have a really stable joint,” said Zienowicz. 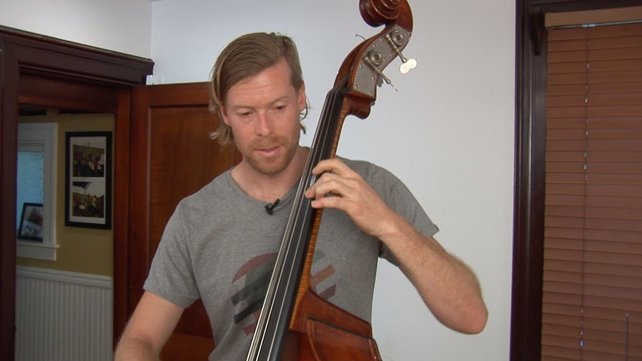 Brigham emerged from surgery with the finger reattached at precisely the angle he’d need for his instrument. But he had an intense recovery ahead of him.

“The doctor was able to reconnect all of the vascular structure. Remarkably, he was able to stitch all of that together on a microscopic level,” says Brigham.

That vascular network needed round-the-clock monitoring to ensure blood flow to the finger was maintained. The plastics team even used leech therapy, an archaic-sounding but highly effective technique in which specially bred medical leeches are used for their natural anticoagulant properties. Leech therapy required round-the-clock monitoring by staff who would replace leeches at two-hour intervals.

Brigham is quick to credit the plastics team, nursing staff and family who kept him going through the grueling lack of sleep and unpleasant constant company of the leeches.

“The nurses worked closely with the plastics team to execute the plan for each day, or maybe in even shorter increments – the pain medicine, the leeches, really seeing the doctors’ orders through,” said Brigham. “They are all wonderful people who give a lot to their patients.”

“After about eight months of recovery, I am able to do all of the things that I communicated to Zienowicz that night,” said Brigham. “I would say that the absolute best outcome is what I got.”