It was an emotional day for Carol Sandler. Her sister had recently undergone a liver transplant at an Indianapolis hospital, and Sandler had escorted her sister on a plane from Indiana back to Massachusetts. Sandler celebrated with her family and at last had driven to her own home. Finally, she had a quiet moment.

Sandler grabbed a sandwich from the refrigerator, sat down on her bed and took a bite.

“Suddenly, I couldn’t swallow,” says Sandler, who was 60 at the time. “I stood up and it felt like I was melting.” She managed to get to a phone. “Something is wrong” was all she knew and all she could tell the 911 dispatcher.

Doctors at a nearby hospital determined Sandler had an aortic dissection. The condition involves the tearing of the inner layer of the aorta, the major artery carrying blood out of the heart. 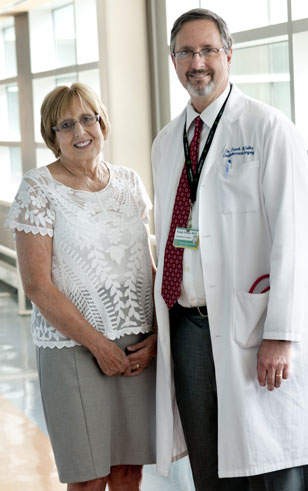 Sandler needed surgery immediately or she would die. Doctors prepared her to be transported to Rhode Island Hospital to be cared for by Lifespan Cardiovascular Institute physicians. The destination surprised her husband.

“My first thought was ‘why not take her to Boston?’” her husband, Frank Sandler, says. “Doctors said there wasn’t time to go to Boston and that Rhode Island Hospital was a great place for this surgery.”

Frank Sellke, MD, chief of cardiothoracic surgery at the hospital, operated on Sandler. He found that Sandler’s aortic dissection was extensive and that he needed to replace the aorta and the aortic valve. He also needed to perform three bypasses due to dissected arteries to the heart.

In order for Sellke to operate on the heart and aorta, he had to cool Sandler’s body temperature to the point that would stop her heart and breathing, using a method called hypothermic circulatory arrest.

“When we first arrived at the hospital, we didn’t realize that this could be a ‘goodbye situation’ for our family and Carol,” Frank Sandler says about the six-hour surgery. “We realized the gravity of her condition as the amount of time and the number of procedures kept growing.”

Sellke says the surgery was “very extensive” but successful. Sandler would spend 15 days in the hospital before going home to make a full recovery.

“The Cardiovascular Institute has experienced outstanding results in this area, much better than the national average. Carol came to the right place,” says Sellke.

While Sandler recovered, Sellke investigated the cause of her unusually extensive dissection. He ordered tests that revealed that Sandler suffers from Loeys-Dietz syndrome, a rare genetic disorder of the body’s connective tissue. A telltale sign of the condition is the enlargement of the aorta. Loeys-Dietz also affects other blood vessels, bones, joints, the skull and internal organs.

Over his 25-year career, Sellke has seen the condition in only two patients.

The genetic disorder now raised health concerns about others in Sandler’s family.

Sandler and her family turned to the multidisciplinary team of the Cardiovascular Institute and Rhode Island Hospital’s pediatric division, Hasbro Children’s Hospital, to find out whether anyone else in the family had Loeys-Dietz syndrome.

The Sandlers’ three sons and grandchildren met with genetic counselors at Hasbro Children’s to undergo a genetic risk assessment. The genetics team found that the Sandlers’ 31-year-old son Scott, 36-year-old son Bryan and his two-year-old daughter Ella Marie have the genetic defect. Sandler assumes her mother, who died of an aortic dissection, had Loeys-Dietz syndrome as well.

Knowledge of the condition is critical to the family, allowing them to take preventive measures like regular exams to watch for aneurysms. Worsening aneurysms can be slowed by using medication and an aortic dissection or rupture can be prevented by surgically replacing a dilated section of the aorta. Lifestyle precautions are also suggested. For example, contact sports, competitive sports, and certain kinds of exercises and activities should be avoided.

“Obviously, it is good information to have for my sons and granddaughter,” says Sandler. “They will have once-a-year doctors’ appointments to keep an eye on the aorta. It’s a preventive measure, like an annual mammogram.”

Frank Sandler says his family was “amazed” by the compassion and the world-class care they found at the Cardiovascular Institute and Hasbro Children’s Hospital.

“The genetics program here was tremendous. The amount of time they spent with us and the tireless work was incredible. They went above and beyond.”

“What you learn from an ordeal like this is that life is precious,” says Sandler. She remains active in her family’s business but is “slowing down” in order to do the things she enjoys, including spending time with her family. Her husband credits Sellke for making that possible.

“Look what Dr. Sellke did. I would not have my wife. She would not have a chance to play with her beautiful grandchildren,” Frank Sandler says. “People in this region have a tremendous resource. There is no reason to go to Boston for this level of care. It’s right here.”