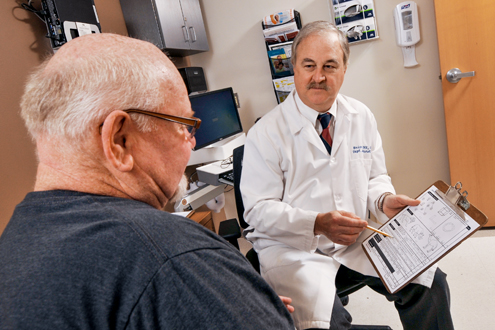 The most common chronic memory disorder is Alzheimer's disease, which affects approximately 5 million people in the United States. In Rhode Island, with its large elderly population, Alzheimer's Disease is particularly common, affecting an estimated 25,000 men and women.

Alzheimer's disease is a progressive disorder of the brain that slowly destroys a person's memory and ability to learn, reason, communicate and perform daily activities. However, because there are more than 70 different causes of dementia, a comprehensive diagnostic evaluation is an important first step when dealing with symptoms of memory loss. In fact, some people with memory difficulties are actually suffering from depression, rather than a progressive brain disorder. Although they may have symptoms similar to early Alzheimer's disease, they respond to treatment once a correct diagnosis is made.

There is currently no cure for Alzheimer's disease and other degenerative memory disorders, but new treatments are available to help alleviate patients' symptoms and slow their progression. Important and innovative research studies are ongoing and continue to shed new light on these illnesses. We now know that the pathologic changes to the brain from Alzheimer’s disease begin many years, probably decades,  before symptoms become manifest.  Therefore current clinical trials are using drugs aimed to slow progression to dementia in the prodromal phase called mild cognitive impairment, and even prevent the disease by treating those at greatest risk before any memory loss has occurred.

What is Alzheimer's disease?

Dementia is defined as a progressive deterioration of intellectual function sufficient to affect one's daily functions in life and is commonly due to the death of brain cells. Alzheimer's disease (AD) is treatable, but incurable, and in the United States accounts for more than half of dementia cases.

What are the symptoms of Alzheimer's disease?

In nearly three quarters of cases, AD starts with the inability to remember recent events and to learn and retain new information. In early stage AD, other areas of cognitive decline accompany memory problems, such as in word finding. The ability to follow instructions and perform higher order cognition such as abstract (conceptual) reasoning also shows decline. Daily living activities that suffer include managing money, driving and shopping. Poor judgment, emotional instability, depression, anxiety and apathy are common.

AD can be distinguished from other types of dementia, such as Parkinson's disease and strokes, in part by the constellation of these symptoms exhibited, their speed progression, and absence of motor impairment.

What tests are used to diagnose Alzheimer's disease?

Physicians can correctly diagnose AD about 90 percent of the time based on symptoms, a physical examination and neuropsychological and routine laboratory tests. Recently, spinal fluid testing for amyloid and Tau proteins, PET scans for metabolic activity and amyloid burden have increased this certainty further.

A physical examination is performed to help exclude other less common dementias. Other routine tests such as blood thyroid and B12 levels are commonly ordered but are not found to be frequently abnormal. Brain MRI and CT imaging provide structural information and may show shrinkage of the hippocampus, but more often show generalized atrophy and microvascular changes which are not specific to AD. SPECT images show reduced blood flow in temporal and parietal lobes of the brain in AD. Amyloid-binding based PET images with agents PIB and AV45 show the greatest promise as to detect pre-AD and early-stage AD.

Neuropsychological testing is helpful in confirming the pre-Alzheimer's condition called MCI and in differentiating among the various dementias in difficult cases.

Ninety-five percent of all AD cases are sporadic, meaning no familial inheritance pattern is recognizable. Familial Alzheimer's disease (FAD), or early-onset, is an inherited, rare form of the disease affecting less than one percent of Alzheimer's disease patients. FAD develops before age 65 in people as young as 35. It is caused by one of three gene mutations. If even one of these mutated genes is inherited from a parent, the person will almost always develop FAD. Offspring in the same generation have a 50/50 chance of developing FAD if one parent has it. Sporadic cases of AD also occur among young adults who have no family history of dementia. However, early-onset cases comprise less than 10% of AD.

The vast majority of Alzheimer's disease cases are late-onset, not inherited and usually develop after age 65. Late-onset Alzheimer's disease has no known cause. However, in some families, clusters of cases are seen and in a few, the pattern of inheritance can resemble that of a mutation. Although a specific gene has not been identified as the cause of late-onset Alzheimer's disease, genetic factors do appear to play a role in the development of this form of the disease. A gene called Apolipoprotein E (ApoE) appears to be a risk factor for the late-onset sporadic and inherited forms of AD. There are three forms of this gene: ApoE2, ApoE3 and ApoE4. Roughly one in four Americans has an ApoE4 and one in twenty has an ApoE2 allele. While inheritance of ApoE4 increases the risk of developing AD, ApoE2 substantially protects against the disease.

Scientists believe that several other genes may influence the development of Alzheimer's disease by modifying risk. Genetic risk factors alone are not enough to cause the late-onset form of Alzheimer's disease, so researchers are actively exploring education, diet and metabolism, and environmental factors and exposures to learn what role they might play in the development of AD.

What research is being done to find the cause and cure(s) for AD?

Many researchers believe a protein by-product termed beta-amyloid is responsible for brain cell dysfunction and death; other proteins are also involved. The AD process begins with an imbalance in protein production, elimination and toxicity, favoring accumulation of beta-amyloid in the brain and blood vessels. Research is ongoing to find ways to decrease production of beta-amyloid (e.g. enzyme inhibitors), increase amyloid elimination (e.g. antibody mediated) and reduce its tendency to aggregate (small molecular inhibitors) or damage critical cell functions or organelles.

Other research is focusing on finding biomarkers to detect AD at its earliest stage and which are sensitive enough to follow disease progression. Earlier recognition of the disease is needed to test early intervention therapies designed to reduce brain dysfunction before nerve cells are lost. These markers include various amyloid and TAU detecting agents with imaging technology, electroencephalogram analysis and novel spinal fluid protein detection assays.