Meet patients who have successfully lost weight, kept it off, and changed their lives.

Jamie had a long road to surgery. Having struggled with weight her whole life, she looked into a laparoscopic weight loss procedure while living in Connecticut almost 20 years ago. After her insurer at the time denied the surgery, she was approved for an “open” procedure at another nearby hospital.

The night before her pre-op, she found out about a family history of Factor V Leiden, a mutation that increases the risk of blood clots. She tested positive for the marker and decided against the surgery.

“At the time, I had twins that were only a few years old,” said Jamie. “I decided an elective procedure with that level of risk wasn’t worth it—even though I wanted it so badly.”

Years later, at age 50, Jamie’s health began to decline. “Until that point I was always the ‘active fat girl,’ so not much stopped me,” she said. “But from 50 to 54, I was diagnosed as an insulin-dependent diabetic, developed pulmonary hypertension, got pneumonia 4 times, and began experiencing pain in my knees. I knew that something had to give.”

Jamie was so excited to get the date for her third attempt at weight loss surgery—March 25, 2020. Seven days into the required two-week liquid diet, she got a call saying her surgery was cancelled due to COVID.

At long last, she had the RnY gastric bypass surgery that August with Dr. Ryder, calling it the “absolute best decision I ever made.”

“I went home on no insulin and no Metformin, which was the first real win,” she said. “From there I started walking, a little more each day, and now I go to the gym. I knew right from the start that exercise had to be part of it—I believe that commitment is a big reason why I’ve been successful.”

Jamie says the surgery changed her relationship with food, helping her discover mindful eating. “I haven't stopped myself from doing things I love that involve food, like going out to eat or socializing with people,” she said.

But there have been challenges—for Jamie, the biggest was hair loss, a common symptom of bariatric surgery that’s not often talked about. “I already had very fine, thinning hair, and six months in I started to lose it. I was super excited about my body transformation, but would cry because I had no hair.”

Jamie said support from family and friends and a Lifespan bariatric support group on Facebook helped her manage the hair loss.

“There are some naysayers who say, ‘You took the easy way out.’ I disagree—there's no easy way, and every person has their own journey.”

The surgery was the boost Jamie needed to achieve a healthy lifestyle. “I had tried dieting. I had tried everything. I kept saying to myself, ‘I know I could do this if I just had a jump start.’” 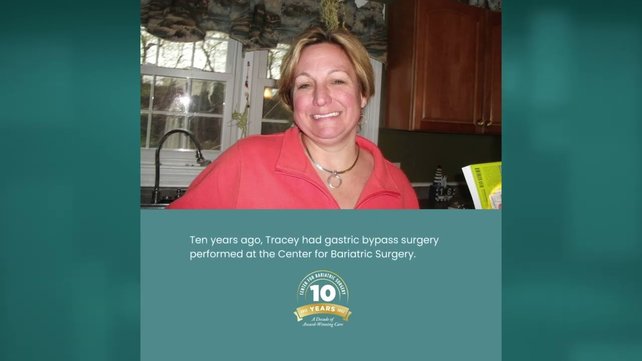 Tracey had tried a variety of diets but nothing really stuck until she had gastric bypass surgery, performed by Dr. Vithiananthan of the Center for Bariatric Surgery.

“It wasn’t an easy way to lose weight,” says Tracey, “but I succeeded because I followed the path. With the help of the great support staff at The Miriam Hospital, I have had the opportunity to get my life and health back.” 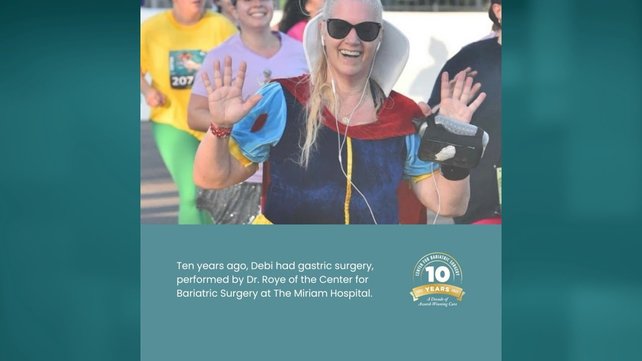 After Dr. Dean Roye performed Debi’s gastric surgery in October of 2012, she found a community in the support group, traveling across the country to participate in fun runs. Debi says, “My gastric sleeve is just a tool to maintain my [weight] goals. But I can always rely on the support I have available through the CBS groups.” 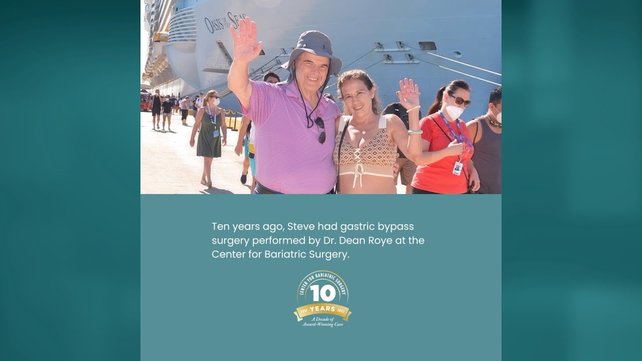 Ten years ago, Steve Perry was one of the first patients at the Center for Bariatric Surgery. Since his surgery, he’s kept the weight off and found a new lease on life.

“My overall quality of life has never been better or more enjoyable.” 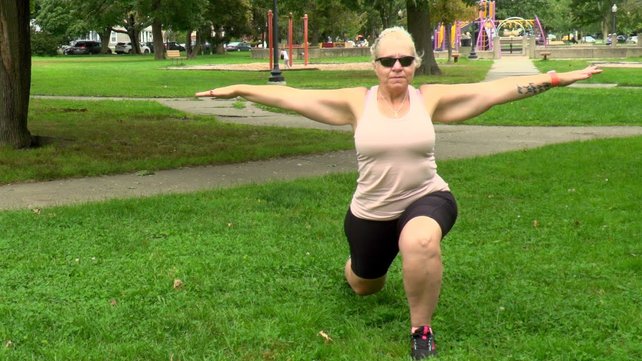 After trying “every diet under the sun,” without success, a health crisis on a medical missionary trip made her realize she had to get serious for herself.

She had gastric bypass surgery in 2005 and committed to a successful lifestyle transformation, losing and keeping off over 100 pounds. Kellie has completed spartan races, iron man triathlons, and a few dozen marathons. She became the program manager of Center for Bariatric Surgery several years after her procedure and helped hundreds of others on their weight loss journeys.

“While running about two years ago, I began to notice bruises around my hips, rashes on my skin, and significant discomfort,” said Kellie. “I wasn’t as comfortable in my body.”

She underwent a panniculectomy, or removal of excess skin on the abdomen, and elected to add a back lift to make the procedure a full truncal lift, or a 360-degree circumferential incision. Kellie was back to walking within a few days and was able to jog again after about eight weeks.

“Patients like Kellie who seek out body contouring surgery have worked really hard to lose all this weight and achieve a healthy lifestyle,” said Dr. Sullivan. “The surgery is that ‘last step’ which allows their bodies to match how they feel.”

“Both surgeries have given me back my health and improved my ability to be a better nurse, parent, and grammy,” said Kellie.

A severe asthma attack that landed her in the emergency department (ED) at The Miriam Hospital forced Belinda Clarke, BSN, RN, to finally make the life-changing decision to have weight-loss surgery.

In the ED, her EKG was abnormal. There is a history of heart attack and stroke on both sides of her family, Clarke said. At 292 pounds, the nurse realized she “was heading down the same path” unless she took action to lose weight.

The wife and mother of two has worked at The Miriam Hospital since 2013, first as a CNA and the last two years as a registered nurse. When she began caring for recovering weight-loss surgery patients in the special care unit, she met Kellie Armstrong, MS, RN, CBN, program manager of the Center for Bariatric Surgery. Armstrong’s own weight-loss surgery success story was an inspiration to her, Clarke said.

Having just dipped below the 200-pound mark three months after her September surgery, Clarke now feels she is an empathetic role model for her patients, since she can say, “Yes, I do know what it’s like.”

And she’s thrilled to be the active mom to her children that she wants to be. “They can’t keep up with me now,” Clarke said. “I’ve literally been given a second chance.”

"I'd been overweight for most of my life and struggled through every program imaginable, with success for a while, but always returning to old habits and behaviors. I contemplated surgery, but I was afraid. After seeing a photograph of myself and seeing how big and sad I was I knew I needed help. I made the call to The Miriam Hospital and was treated so kindly. Going to the initial consultation really changed my life. I saw the surgery as a tool to help me. I learned about my options. [In] my subsequent visits through pre-op I felt so prepared and informed. After surgery, the follow up and support was amazing. I wasn't sold a 'quick fix'; I was offered the opportunity to utilize a tool that can help me change my life and it absolutely did. I am tremendously grateful for all of the knowledge and support from the Center for Bariatric Surgery!"

Complete our patient information seminar from the comfort of home. Take the orientation online »

"I had the VSG on August 19, 2015. I made the decision to have surgery in November 2014. I called University Surgical Associates and requested an appointment with Dr. Roye. That day, I made a decision that changed my life. I attended my first weight-loss surgery (WLS) seminar on January 5, 2016. After seven months of seminars, psych visits, nutritional visits and health testing, I had VSG surgery done. My highest weight was 315 pounds, back in 2011. My surgery weight was 305 pounds. On the day of surgery, I was diabetic and had high blood pressure.

"It's been 21 months and I am completely healthy. I am no longer diabetic and my blood pressure now runs low. I have lost 130 pounds and have maintained this weight loss for the last six months. I go to the gym four days a week. I eat small portions and take in 100 grams of protein a day, and I am training to do my first half-marathon in August.

"I won’t say this journey has been easy. There is no easy fix to weight loss. My new stomach was only a tool given to me by my surgeon to help me in weight loss journey. But what I can say: It has changed me. I have learned that my life doesn’t need to revolve around food. I have learned to make better choices and understand that, since surgery, everything I eat and how I exercise will affect my journey, and to maintain my loss, I need to continue working at this every day."

Learn about the support available to you »

Katherine Martineau was 22 when she had a vertical sleeve gastrectomy (VSG). Her surgeon was G. Dean Roye, MD. Read Katherine's story below.

"I have made lots of changes in my lifestyle in the past 18 months regarding nutrition and exercise, because surgery is a tool, and it only works if you do! I went from 243 pounds, extra-extra-large shirts and size 18/20 pants to 158 pounds, medium shirts and size 6/8 pants. I exercise five days a week (cardio and weights) and I have never felt better or had more energy.

"I am so appreciative of everyone at [The Miriam Hospital]!!"

The dangers of childhood obesity »

Tammy Werner was 48 when she had gastric bypass surgery. Read Tammy's story below.

"I have done diets and exercise throughout my lifetime and have lost large amounts of weight. Each time, the weight has come back. As my age goes up and my health declines, I know I have to do something more.

"Getting the gastric bypass was the best thing that I have done for myself. Ever. The day of surgery I knew that I would wake up in pain and possibly nauseous but that all would be fine. I wore my Fitbit to the hospital and walked 10,000 steps a day. I have since been walking and exercising and I am healthier than I have been in a very long time and very happy!" 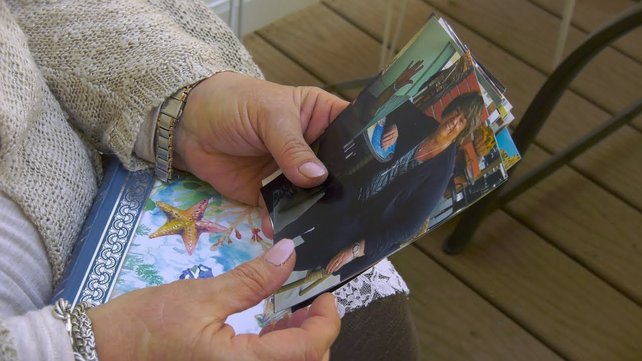 Rose struggled with her weight from childhood. With support from medically supervised weight management and bariatric surgery programs at The Miriam Hospital, Rose lost more than 125 pounds.

You Can Start Now

Take the first step: Complete our patient information seminar. Patients can now complete this seminar from the comfort of home. Take the orientation online »