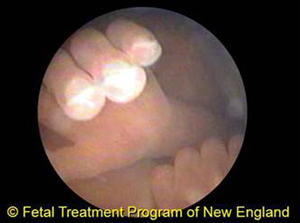 Fetal intervention refers to the techniques used to treat a fetus inside the uterus. Although many diseases and conditions can be diagnosed before birth with imaging and genetic tests, very few actually require intervention. If we determine that your baby would benefit from intervention, we will explain all of the options and their benefits and risks.

If you decide to have fetal intervention, our most important consideration becomes your health. While the goal of any fetal intervention is to treat the fetus, to do so requires access to the uterus and this may present varying degrees of risk for you. If the uterus is accessed through surgery, particularly open fetal surgery where an incision is made, there are anesthetic and surgical risks. If the uterus is accessed through a needle or other fine instrument, the risks are much lower. It’s our team’s responsibility to ensure your well being first.

There are three fetal intervention techniques: