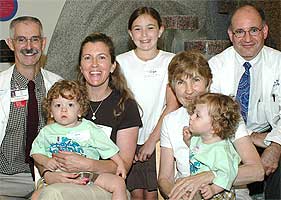 Sara Belisle of Kensington, New Hampshire, had just come back from visiting her sister in Amsterdam when she found out she was pregnant. Soon afterward, she thought she had lost the baby. Fortunately, that wasn’t the case — at 10 weeks an ultrasound was performed and Sarah found she was having identical twins. Three weeks later, she got some bad news.

Belisle was diagnosed with twin-to-twin transfusion syndrome (TTTS), a condition she had never heard of. She was advised not to read too much about it, either. Doctors in New Hampshire told her they could not manage this condition and referred her to New England Medical Center in Boston. Her case was so severe she was immediately put in touch with the Fetal Treatment Program. She underwent surgery two days later. While she was on bedrest doctors continued to monitor her with ultrasound twice a week until she gave birth at 29 weeks. Her boys were born prematurely on November 26, 2004, weighing 2 pounds and 2.14 pounds. Both were in the hospital for several months. Her boys, Adam and Eric, are now healthy. During her pregnancy, friends, neighbors and people from her church rallied around the Belisle family, bringing them dinners, helping out with her 9-year-old daughter Allison and giving a lot of moral support. 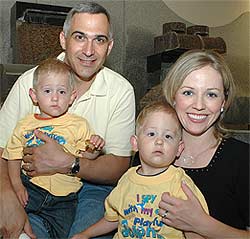 Heidi Ramsay Caruso and her husband, Paul, of Salem, New Hampshire, had been advised by their doctor that they needed to terminate Heidi's pregnancy. The identical twins she was carrying suffered from acute twin-to-twin transfusion syndrome. After a series of unsuccessful procedures, they had been told that there was no hope to carry the pregnancy to viability and that it was the last and best option to preserve Heidi’s health and allow her to get pregnant again.

That night, she went on the Internet and found another option: the Fetal Treatment Program. She left a voicemail at 3 a.m. and got a reply at 7 a.m. that doctors could operate that day, if it was medically appropriate. As her husband drove to Providence from their home in New Hampshire, Heidi was in so much pain that she couldn't sit up. By 2 p.m. she was in surgery. Two weeks later, at 25 weeks gestation, she gave birth prematurely to twin boys, Brendan and Brody, who weighed 1 pound 1 ounce, and 1 pound 11 ounces, respectively. Brody stayed in the neonatal intensive care unit for 87 days, and Brendan was there for 99 days. They were both home by their due date. Despite some initial health problems related to their prematurity, both boys are now healthy. They have a step-brother, Paul Jr., 15, and a step-sister, Alessandra, 13.