Twin-to-twin transfusion syndrome (TTTS) is a rare condition that occurs only in identical twins during gestation. Twins normally share a balanced exchange of blood in the womb; however, in TTTS, one twin always donates blood to the other. In this unbalanced exchange the donor twin is often the sicker of the two and at higher risk of dying in utero. The donor twin may develop anemia from the blood loss to the recipient twin, and is usually smaller and underdeveloped due to the increased work required to pump blood for both twins. The donor twin also produces less amniotic fluid, which can result in the twin becoming wrapped in the amniotic membrane.

The recipient twin continuously receives extra blood and needs to cope with this excess fluid. Typically, this twin will produce too much amniotic fluid (polyhydramnios), and is at risk of heart failure because of the fluid overload. Not all forms of TTTS are the same—there are several degrees of severity and it can worsen, improve or stay the same over time. Download information about Twin-To-Twin Transfusion Syndrome (pdf) 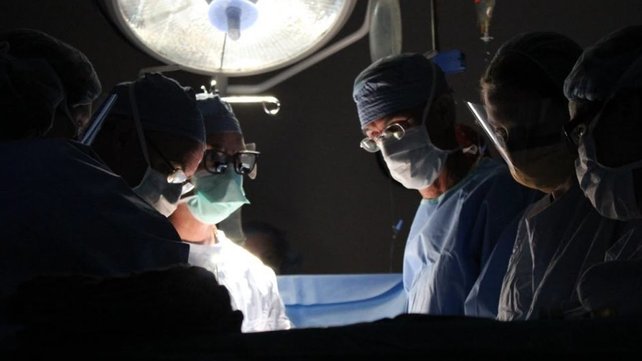 How Common Is It?

TTTS occurs in approximately 15 percent of all identical twins or 6,000 fetuses in the United States each year. The condition can also affect triplets and higher order pregnancies; however, it only occurs in identical siblings and never in fraternal ones.

How Is It Diagnosed?

TTTS is diagnosed through ultrasound and can develop at any time during pregnancy, even as early as four months. TTTS is most dangerous in the early stages of pregnancy when delivery is not an option.

Mothers may experience the following symptoms, all of which are due to the excess amniotic fluid around the recipient twin:

What Can Happen Before Birth?

The recipient twin is usually larger and has too much blood, increasing the risk for heart failure. This twin produces an excess of amniotic fluid, which is uncomfortable for the mother and may cause premature rupture of the membranes (“breaking the water”) or premature labor. The excess fluid may also cause other complications in the recipient twin, such as the retention of fluid around the lungs or heart, in the abdomen or under the skin.

What Can Be Done Before Birth?

There are a few options to treat TTTS before birth, but only the most severe cases should be treated with fetal intervention.

Observation, with or without bed rest. If TTTS occurs in the third trimester, conservative measures and early delivery are usually recommended. There are typically fewer risks associated with delivering prematurely than intervention in the womb.

What Are My Delivery Options?

If severe TTTS develops or worsens after 26 weeks of gestation, when the babies can survive outside the womb, it is usually preferable to deliver early. Once they are born, the syndrome is automatically halted (since the twins are no longer connected), but the effects of the syndrome may not disappear right away. In most cases they are best treated after birth in the neonatal intensive care unit (NICU).

If the syndrome improves on its own—this happens in approximately 60 percent of early stage cases of TTTS—or if laser surgery has been performed, most physicians still prefer to deliver the babies a few weeks before full term (at 36 to 37 weeks) to avoid further complications. Even after endoscopic laser surgery, a Cesarean section is not necessary other than for obstetrical reasons, which can be common in twin pregnancies.

What Is the Long-Term Outcome?

When TTTS is severe and fetal intervention is not performed, one or both twins die in nearly all cases. Because the twins are connected through blood vessels in the placenta, the death of one is often followed by the death of the other. Those twins who survive may experience severe heart or brain damage. If laser fetal surgery is performed, at least one twin survives in about 80 percent of pregnancies and both twins survive in about half of those. The long-term outcome of the survivors depends on the degree of heart failure that was present before intervention. Most twins who survive until after birth will do as well as other infants born at the same gestational age. However, prematurity is common with twins, and even more so in twins who suffer from TTTS.