While at a routine eye exam, Pamela Lambert’s optometrist noticed “bear tracks” across her eyes. Lambert had a colonoscopy performed and was diagnosed with colorectal cancer. 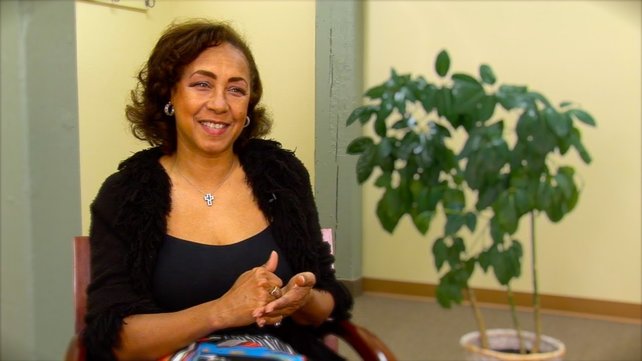 Pamela Lambert’s cancer diagnosis came from an unexpected source. While at a routine eye exam, her optometrist noticed “bear tracks” or Congenital Retinal Pigment Epithelial Hypertrophy across her eyes –a lesion often linked to colon cancer – and urged her to get a colonoscopy. Lambert had a colonoscopy performed and, a short time later, she was diagnosed with colorectal cancer.

What Lambert didn’t expect, however, was all of the changes she experienced following her chemotherapy treatment. With her cancer in remission, Lambert was still experiencing side-effects such as uterine bleeding, neuropathy and incontinence. She found herself dizzy, fatigued, unbalanced and unable to stand steadily. Lambert, however, simply accepted these issues as the norm for life after cancer.

“My oncologist said to me about a year after my surgeries, ‘so how are you doing? Are you going to the bathroom okay?’ and I said ‘yes sir!’” Lambert says.

However, these issues continued to impinge on her daily life, forcing her to reshape her routines and habits to withstand these symptoms. She found herself keeping her entire body clenched at all times in an attempt to counteract her incontinence.

“I had been clenching for more than two years,” Lambert says, “I’m the person who tries to make a joke out of absolutely everything and I couldn’t relax.”

After years of tolerating these side-effects and dismissing them as normal, Lambert finally spoke with her doctor about what measures she could take to find relief and control. There, her journey with the Women’s Medicine Collaborative began.

Lambert first discovered the Women’s Medicine Collaborative when she began working with Doreen Wiggins, MD, FACOG, FACS, director of the Cancer Survivorship Medicine Program. With this program, Lambert learned holistic and integrative methods to improve her daily well-being and facilitate her recovery. However, Lambert was still experiencing physical symptoms of a pelvic floor disorder. Her physical therapist suggested she try pelvic floor therapy to alleviate these issues and she was consequently referred to Christy Ciesla, PT, DPT, a physical therapist with the Program for Pelvic Floor Disorders. There, Lambert received manual therapy to increase flexibility in her pelvic muscles. She also learned techniques to regain control in her pelvis and sphincter to manage her incontinence.

“I didn’t understand what pelvic floor therapy was,” Lambert says. “I did not realize it’s, in some ways, like a gynecological exam.”

Lambert wants other women to know what to expect during their appointments and throughout treatment. During their first visit, women can expect a conversation to learn about their medical history, a health screening and a vaginal exam if necessary. But recovery doesn’t end at the health care provider’s office. Women need to bring home the techniques and exercises they learn from their physical therapist in order to continue regaining strength and control in their pelvic muscles.

“Pam has been a model patient,” Ciesla says, “It’s not just as much as what we do in the clinic that’s important. A patient can’t expect to be fixed by their therapist when they do pelvic rehab. They have to go home and make the changes necessary for their lives.”

Ciesla continues, “Pam was able to take what I told her and then integrate it into her daily life and she has seen tremendous results with her therapy.”

Ciesla has seen and treated numerous women with similar issues. At least one in four women experience the symptoms of a pelvic floor disorder at some point in life. These symptoms include incontinence, constipation and pelvic pain among others. Pelvic floor disorders can occur at any age or condition; they are not just a result of childbirth or aging.

“This is a very difficult thing for women to talk about. When you talk about issues around urine, feces, or sex, it’s not easy to bring up with your doctors,” Ciesla says, “It’s actually believed there are more women suffering with pelvic floor disorders than the one in four.”

As Ciesla points out, the reason for this discrepancy may come from reluctance in women to discuss the issue with their health care provider. Like Lambert did, women may accept these symptoms as normal rather than bring attention to them.

The Program for Pelvic Floor Disorders at the Women’s Medicine Collaborative offers a multidisciplinary team of clinicians who treat these symptoms with expertise and sensitivity. With physical therapists, gastroenterologists, gynecologists, dietitians and surgeons available, the program helps women recover from a range of issues with treatment specialized to the condition and needs of each individual patient.

The first step to recovery, however, comes with speaking to your health care provider.

“I want women to understand that this is not normal, that there is help out there. At the Women’s Medicine Collaborative we see women everyday with these issues. You are not alone and you don’t have to suffer in silence. You should be able to get beyond these symptoms and live a completely normal life,” Ciesla says. “No matter how private and uncomfortable you are, all it takes is to say one thing to your physician to make this better for yourself.”

“The women here at the Women’s Medicine Collaborative understand what you’re going through,” Lambert says. “We all think that whatever it is we’re going through, nobody knows. But there’s somebody out there who does know and they know the right questions to ask. Being at a place where the right questions are asked, your chances of being a happy, healthy, normal person are so much better.”

Lambert continues, “Coming here to the Women’s Medicine Collaborative has made handling the changes and my new normal so much easier.”

Never one to give up, Lambert hasn’t given up any of her big personality. Rather, she has chosen to take control of her recovery, to embrace her new normal.

More about the Program for Pelvic Disorders