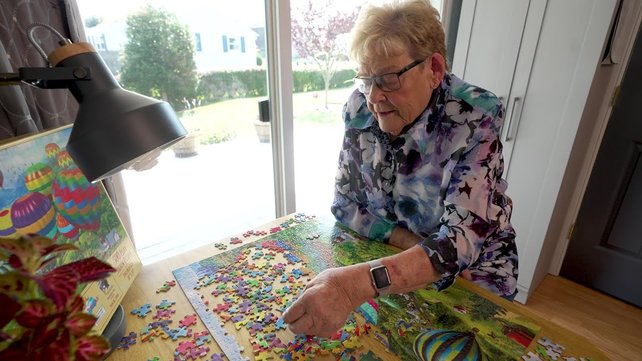 While recovering at Newport Hospital from an orthopedic procedure, Nurse Lois Mass’ unexplained fever led to the discovery of multiple abdominal tumors. Learn about the culture of caring that led to her recovery and rehabilitation.

She Broke Her Ankle — and It Saved Her Life

When Lois Mass fell at her Middletown home and broke her ankle, she received, at least, a small measure of comfort knowing she would be taken to Newport Hospital to have her injury surgically repaired. “I knew I’d be in good hands,” she says.

But what the retired nurse didn’t expect—but would come to learn firsthand—were the incredible lengths the Newport Hospital team would go to ensure she had a positive outcome, even if what she came in for didn’t turn out to be her biggest concern.

Mass' orthopedic surgeon noticed that she had a fever, which persisted even after he had taken steps to reduce it. This prompted the doctor to consult with a hospitalist. Among other tests, the hospitalist took a CAT scan of her abdomen, which revealed three large tumors on her colon. Just days later, Mass underwent a colectomy to remove the tumors. Shortly after that, she had ankle surgery and then went to the Vanderbilt Rehabilitation Center for 10 days of recovery. All told, she spent a month inpatient at Newport Hospital.

“The fact that I received the wide range of expert care I did all in one place is amazing,” Mass says. “The doctors, the nurses, the support staff… I can’t thank them enough. The way I see it, the hospital staff could have done my ankle surgery and sent me home, but we probably would never have known about the cancer. I’m so grateful they went the extra mile. They saved my life.”

Learn about the four generations of Lois Mass' family who have been called to nursing.