December 1st is World AIDS Day – a day set aside to bring attention to the continuing impact of HIV/AIDS both here in the United States and across the world. The first was held in 1988, and we are very happy to see the tradition continue.

We have made significant progress toward understanding HIV/AIDS. HIV is the virus that attacks the immune system, which causes it to fail and leads to AIDS (acquired immune deficiency syndrome). People with AIDS eventually get sick from other infections, often leading to death.

However, thanks to research, we now have life-saving medications called antiretrovirals (ARVs) that can prevent HIV from progressing to AIDS. People with HIV who take ARVs now have a near-normal life-expectancy, especially when diagnosed early! Taking ARVs can also prevent transmission of HIV to others. When someone with HIV takes their ARVs, it brings the HIV in the blood down to an “undetectable” level. This means that the person with HIV is now very unlikely to transmit to other people.

The key is finding HIV early. That not only allows that person to live longer (without progressing to AIDS), but it can prevent the spread of HIV through the use of ARVs.

Unfortunately, some people with HIV do not know it. Many times there are no signs that a person may have the virus. Therefore, it is recommended that all people who are sexually active get tested for HIV annually.

HIV is transmitted through sex or contact with contaminated blood products (e.g. needles). Although HIV can infect anyone, some groups in the United States are more likely to be affected. This includes gay, bisexual, and other men who have sex with men (GBMSM). For sexually active GBMSM who have multiple partners, testing is recommended as frequently as every three to six months. But the bottom line is that everyone should be tested at least once in their lifetime, and annually if sexually active.

As we continue to research HIV and AIDS, we continue to win the battle against what was once thought to be a death sentence. Recently, a medication to prevent HIV, pre-exposure prophylaxis (PrEP), was approved by the U.S. Food and Drug Administration (FDA). PrEP is a once daily medication that can prevent HIV if someone is exposed to the virus. For people who may be at increased risk of HIV such as certain GBMSM, PrEP represents a potential effective prevention approach. Other options include condoms, asking partners about their HIV status, and getting routinely tested for HIV and other STDs.

At the Miriam Hospital Immunology Center, we are proud to provide state-of-the-art care for people with HIV and other STDs. The center also provides PrEP and works closely with the Rhode Island Department of Health to provide accessible and confidential STD testing. You can get more information on our center here.

The Miriam Hospital is also involved in cutting-edge research to prevent, diagnose and treat HIV infection.  To learn more about the studies you could participate in, please visit this website, call 401-793-4317 or email us at IDResearch@lifespan.org.

So this December 1, let’s not only continue to raise awareness for HIV and AIDS, but celebrate the milestones we’ve made in treating it. 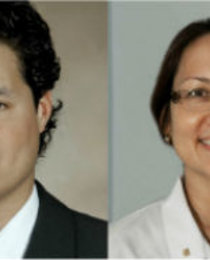 Phillip A. Chan, M.D. and Karen Tashima, M.D. are physicians in the Infectious Diseases and Immunology Center at The Miriam Hospital. Both are experts in the research and treatment of HIV. Dr. Chan helped open and now runs a clinic dedicated to sexually transmitted diseases. Dr. Tashima is director of HIV Clinical Studies and Clinical Research Site Leader of the AIDS Clinical Trials Unit at The Miriam Hospital.