The Bradley Campus Research Unit, under the direction of Gregory Fritz, MD, is part of the Bradley Hasbro Children's Research Center (BHCRC). Its offices are located in the east wing of the Laufer building on the Bradley Hospital campus in East Providence, RI.

The goal of the Pedi-MIND program is to identify biological and behavioral markers of psychiatric illness in children and adolescents in order to improve diagnosis, treatment, and prevention of these conditions. Daniel Dickstein, MD sees patients in the outpatient clinic. For more information and to enroll in a study, please visit Pedi-MIND program.

Daniel Dickstein, MD, is the director of Bradley Hospital's Pediatric Mood, Imaging and Neurodevelopment Program (Pedi-MIND). Board certified in pediatrics, psychiatry, and child/adolescent psychiatry, he is also an associate professor of both psychiatry and human behavior as well as pediatrics at The Warren Alpert Medical School of Brown University.

He was previously an assistant clinical investigator with the pediatric and developmental neuropsychiatry branch at the National Institute of Mental Health (NIMH). Dickstein earned his undergraduate and medical degrees from Brown University, and is a graduate of the school's triple board program, a combined residency in pediatrics, general psychiatry, and child and adolescent psychiatry, that leads to board eligibility in all three specialties after five years of training.

The Developmental Disorders Genetics Research Program seeks to identify genes associated with autism and intellectual disability so that it can be detected and diagnosed earlier and more accurately and treated more effectively. Eric Morrow, MD, PhD, sees patients on the Bradley campus. His genetics and neuroscience research lab is located at Brown University. For more information or to enroll in a study, please visit the Developmental Disorders Genetics Research Program.

Eric Morrow received his PhD in genetics and neurodevelopment at Harvard University and his medical degree from the Health Science Training Program at MIT and Harvard Medical School.

During this medical training, Dr. Morrow developed a strong interest in the scientific challenges posed by childhood neuropsychiatric disorders. He conducted further clinical and scientific training in neurology and psychiatry at Harvard Medical School.

Most recently, Dr. Morrow was one of 102 recipients of the 2017 Presidential Early Career Award in Science and Engineering—the government’s highest honor for a young scientist. The award was bestowed in recognition of his work on understanding and improving treatments for psychiatric conditions including autism and severe intellectual disability.  President Barack Obama said in the announcement, “These innovators are working to help keep the United States on the cutting edge, showing that federal investments in science lead to advancements that expand our knowledge of the world around us and contribute to our economy.” 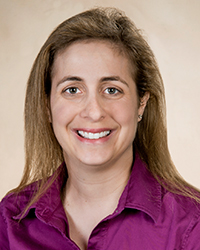 Lindsay Oberman received her PhD in experimental psychology at University of California, San Diego in 2007. While in graduate school she used electroencephalography (EEG) and electromyography (EMG) to study the brain basis of social impairments in children with autism spectrum disorders.

Oberman then obtained a mentored postdoctoral fellowship at the Berenson-Allen Center for Noninvasive Brain Stimulation at Harvard Medical School where she developed paradigms using transcranial magnetic stimulation (TMS) to study brain plasticity and excitability in individuals with autism spectrum disorders.

Oberman was an Instructor in the department of neurology at Harvard Medical School with appointments both at Beth Israel Deaconess Medical Center and Children’s Hospital, Boston prior to coming to Bradley Hospital.

The Health Services Research Program focuses on identifying and remediating gaps in the care of young people struggling with mental health and substance use disorders.

Brady Case, MD, is medical director of the Bradley Hospital Intensive Program for Obsessive-Compulsive Disorder (OCD). He is an assistant professor (research) of psychiatry and human behavior at The Warren Alpert Medical School of Brown University and of health services, policy, and practice at the Brown School of Public Health.

Dr. Case earned his undergraduate and medical degrees from Harvard University. He completed psychiatry residency and clinical research training at New York University and a child psychiatry fellowship at The Warren Alpert Medical School of Brown University, where he was trained in the treatment of pediatric OCD.

Prior to returning to Brown, Case was a research psychiatrist in the statistics and services research division at the Nathan Kline Institute for Psychiatric Research and the NYU Child Study Center. He also serves on the editorial board of the Journal of the American Academy of Child and Adolescent Psychiatry.

His research has focused on the use and quality of care for pediatric mental disorders in the United States. He also has experience in examining patterns of mental health and substance use disorder, mental health service use in complex epidemiologic samples, public and private administrative claims, and health care provider surveys.

RI-CART’s mission is to improve the lives of Rhode Islanders with autism spectrum disorders by promoting collaborative, cutting-edge research, improving health care and support services, and providing data-driven education and advocacy. RICART is a collaboration between Bradley Hospital, Women and Infants Hospital, and Brown University. For more information or to enroll in a study, please visit RI-CART.

Sheinkopf has also held several university and hospital teaching roles. He has been an assistant professor of Psychiatry and Human Behavior since 2001, and has had a secondary appointment in the Department of Pediatrics at The Warren Alpert Medical School of Brown University since 2008. Sheinkopf has also been a member of faculty at Brown University’s Brown Institute for Brain Science since 2003.

Sheinkopf is a graduate of Tufts University. He earned master’s degrees in psychology and doctoral degree in clinical psychology from the University of Miami. He completed his internship at the Brown University Clinical Psychology Training Consortium, and fellowship training at The Warren Alpert Medical School of Brown University under a National Research Service Award from the National Institute of Health.

Sheinkopf’s research interests include the early identification of autism and developmental disabilities in infancy, development of children at risk, and social and communication development and psychophysiology. He has been principal investigator and co-investigator of several research studies focused on autism and child development.