One of the first gamma knife centers in the United States, the Gamma Knife Center at Rhode Island Hospital has been utilizing this lifesaving technology for more than 20 years, and has treated more than 3,300 patients during that time.

Rhode Island Hospital’s Gamma Knife Center brings the power of “Perfexion” to patients. This new technology offers an enhanced level of precision and care for certain types of brain tumors or vascular malformations of the brain. Rhode Island Hospital is the only center in Southeastern New England to offer gamma knife treatment. 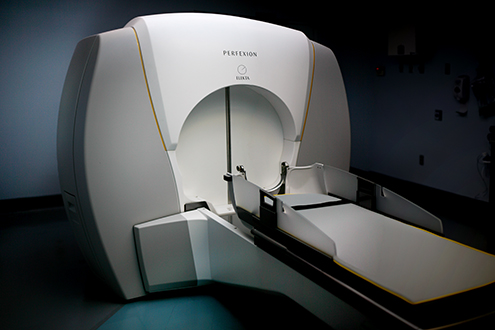 Perfexion is a precise and powerful tool that provides hope to patients with certain brain tumors, vascular malformations and other neurologic disorders, such as trigeminal neuralgia, certain tremors and obsessive-compulsive disorder. Patients undergo a noninvasive procedure that uses a single, high-dose radiation treatment to target small and medium-sized intracranial structures, while sparing nearby tissue.

What We Can Treat

Advancements in technology and proven outcomes have helped dramatically widen the scope of conditions being treated by the gamma knife.

Over 700,000 and counting patients worldwide have undergone gamma knife surgery to treat the following conditions, among others:

More about our radiation therapies »