The nursing staff on our orthopedic unit plays a very proactive role in the treatment and rehabilitation of all joint surgery patients. The nursing team collaborates with physicians, physical therapists and others on the multidisciplinary team to provide the highest quality, most efficient care to every patient.

In keeping with our proactive approach, we have joint surgery patients up and moving as early as the evening of the day of surgery. Patients can expect to be up and walking frequently with the assistance of either the physical therapy or nursing team. Early and frequent ambulation after total joint replacement surgery is paramount to early recovery. Each patient benefits from an individually customized pain management process throughout recovery and rehabilitation.

The nursing, physician and physical therapy teams work collaboratively to keep pain well controlled, while assuring that each patient derives the greatest benefit from their therapy and walking sessions.

The nursing staff strives to continually demonstrate the values that are at the heart of The Miriam Hospital's philosophy, including respect for patients and colleagues, honesty and fairness, constant pursuit of quality and honoring The Miriam Hospital's heritage. This means that each patient benefits from a truly collaborative approach in the surgical and recovery process and can expect personalized treatment and the utmost in high-quality care while at The Miriam Hospital. 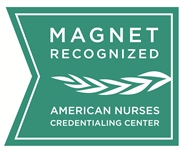 The Miriam Hospital has earned the prestigious Magnet Award for nursing excellence for the fifth time in row, totaling 20 consecutive years. We are proud to be one of the very few hospitals in the United States to be Magnet-designated for such a length of time. This is a testament to the high quality nursing care provided at The Miriam Hospital, as well as to the organization's overall commitment to excellence.

The Magnet Recognition Program for Excellence in Nursing is administered by the American Nurses Credentialing Center (ANCC). Becoming a Magnet hospital means that the organization meets more than 65 standards developed by the ANCC, which are validated by a site visit. Hospitals that have achieved Magnet status have demonstrated improved nurse to patient ratios and higher patient satisfaction when compared with non-Magnet hospitals.