Some wryly call a round of golf “a good walk spoiled.”

Damian Dupuy, MD, would beg to differ. That’s because he’s able to walk the golf course easily again, thanks to a knee replacement at the Total Joint Center, a program of the Orthopedic Institute at Rhode Island and The Miriam hospitals.

Dr. Dupuy is the former director of tumor ablation and diagnostic imaging at Rhode Island Hospital. In the course of his 18 years at Lifespan, he has interacted with the department of orthopedics, and was impressed with the Total Joint Center.

So when it came time to undergo a knee replacement, Dupuy turned to John A. Froehlich, MD, director of the Total Joint Center.

Dupuy’s problems began when he injured his knee as a 16-year-old, and he had undergone multiple “clean-out” surgeries in the 37 years since. However, his work, which requires him to stand for hours, sometimes with the added weight of lead shielding, had taken a toll. He was in constant pain.

“I wanted to be very active, since I’m still young … so I realized that now was the time to have a total knee replacement,” he said. 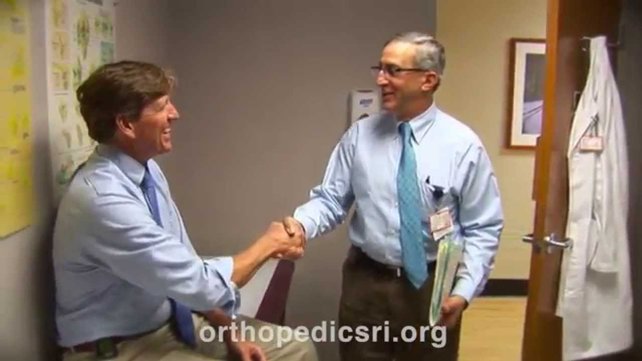 As an aid for Dr. Froehlich, his patient/colleague created a 3-D model of his knee using CAT scan data.

“Dr. Froehlich said it was the worst knee he’d ever operated on,” because of the excess bone that had formed to stabilize the joint in the absence of an ACL (anterior cruciate ligament). That accumulation had to be removed before the surgeon could carry out the replacement.

Just days after undergoing his surgery, Dupuy “transitioned home without any hitches.” He credits the physical therapy he did at home and as an outpatient with speeding his recovery. Six weeks after the total knee replacement, he returned to work, able to provide care to others without being in pain. Once again he could enjoy activities such as gardening, biking, hiking – and golfing.

Three months post-surgery, Dupuy could walk the links in comfort. “It’s improved my golf game immensely,” he said with satisfaction.